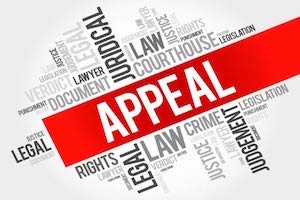 The Mavrick Law Firm provides excellent appellate advocacy for clients in Florida and Federal courts. The Firm has successfully argued both federal and state appeals.  The Firm has won reversals on behalf of appellants and won affirmances on behalf of appellees. The Firm has successfully represented clients in direct appeals, appeals of non-final orders, and in appellate proceedings involving extraordinary writs, including writs of certiorari and writs of prohibition.

“Effective presentation to a federal court of appeals, or to any appellate court, requires a blend of talents not necessarily found in the typical trial lawyer. Appellate advocacy is, in short, a specialty all to itself.”  Hon. Laurence H. Silberman, Plain Talk on Appellate Advocacy, 11 App. Advoc. 3 (1998). “Persuading juries takes different forensic and analytical skills than persuading appellate judges.” Id.  The lawyers of Mavrick Law Firm are experienced with appellate law, litigation, and advocacy.

Appealing a Final Order and Standard of Review

A party can generally appeal any final trial court order (orders completely disposing of the case), as well as certain other types of orders, to the appellate court with mandatory (direct) jurisdiction over the trial court. Fla.R.App.P. Rule 9.030(b)(1)(A)-(B).  Some non-final orders (orders that do not completely dispose of the case) are appealable, including orders on the following: motions concerning venue; motions granting, continuing, modifying, denying, or dissolving an injunction; motions determining an entitlement to arbitration; and motions concerning the appointment of a receiver.  Fla.R.App.P. Rule 9.130 (a)(3)(A)-(D).  Appealable orders entered by a County Court may be appealed to the Circuit Court’s Appellate Division. Appealable orders entered by the Circuit Court may be appealed to the corresponding Florida District Court of Appeal. For example, Miami-Dade County Circuit Court orders are appealable to the Third District Court of Appeal, while Broward County and Palm Beach County orders are appealable to the Fourth District Court of Appeal.

Depending on the issue brought by the appellant (the party filing the appeal), the appellate court either applies an “abuse of discretion” standard (clear error in judgment by the trial court) or a “de novo” standard (as though it was a new proceeding). A de novo standard of review permits the appellate court to reconsider the matter without putting any weight on the trial court’s determination. White v. Mederi Caretenders Visiting Services of Se. Florida, LLC, 226 So. 3d 774 (Fla. 2017) (invoking the de novo standard to the issue of whether referral sources were a protected legitimate business interest). The abuse of discretion standard of review does not permit the appellate court to reconsider the matter, but only to examine the reasonableness of the trial court’s decisions based on its factual findings. Ansaarie v. First Coast Cardiovascular Inst., P.A., 252 So. 3d 28 (Fla. 1st DCA 2018).

The party appealing the order would naturally prefer a de novo standard of review over an abuse of discretion standard of review. Effective advocacy of the parties can assist the appellate court in applying the correct standard of review to the issues on appeal. For example, if a trial court refuses to grant a motion for a temporary injunction because the trial court finds that a non-compete agreement is not reasonably necessary to protect a legitimate business interest, then the parties will likely contest which standard of review applies. An employer may argue that the trial court incorrectly interpreted the contract or statute, which would qualify for de novo review. An employee may argue that the trial court’s decision was correctly based upon a factual finding regarding the protection of the legitimate business interest, which would require an abuse of discretion standard of review.  See e.g. Colucci v. Kar Kare Auto. Group, Inc., 918 So. 2d 431 (Fla. 4th DCA 2006) (applying a de novo review despite the appellate court weighing the evidence and finding that the employer did not have a legitimate business interest); Picture It Sold Photography, LLC v. Bunkelman, 287 So. 3d 699 (Fla. 4th DCA 2020) (reviewing several aspects of a trial court’s order denying an employer’s motion for a temporary injunction under the de novo standard even though the issues were partly evidentiary in nature).

If the matter being appealed concerns a contract that entitles the prevailing party to attorneys’ fees or there is otherwise a statutory basis for attorneys’ fees, the party that is successful on appeal can request an award of its appellate attorneys’ fees from the appellate court.  A motion for attorneys’ fees must be served no later than the service of the reply brief.  Fla.R.App.P. Rule 9.400(b). As an example, Mavrick Law Firm recently won an appeal in the Fourth District Court of Appeal which resulted in dismissal of their corporate client that had been wrongfully sued for breach of contract. Mavrick Law Firm also obtained an appellate court order granting the client’s entitlement to appellate attorney’s fees from the opposing party.

In addition to appeals of trial court orders, Florida’s Courts of Appeal may also issue extraordinary writs.  Fla.R.App.P. Rule 9.030 (b)(3).  An extraordinary writ is a type of appellate court order, where the court exercises its discretionary power to make remedies available which are not regularly within the lower courts’ powers. If the act occurs in the Circuit Court, the petition for extraordinary writ will typically be filed with the appropriate District Court of Appeal.  Florida Rule of Appellate Procedure Rule 9.030(b)(3) provides that “District courts of appeal may issue writs of mandamus, prohibition, quo warranto, and common law certiorari, and all writs necessary to the complete exercise of the courts’ jurisdiction.”  The essential function of each of these writs is simply to review with the appellate court, the particular actions taken by government officials.  Article V, § 2(a), of the Florida Constitution prohibits the dismissal of a cause merely because the remedy was mislabeled. See Fla.R.App.P. 9.040(c). A court may treat a case as if the proper remedy had been sought rather than dismiss it. Florida House of Representatives v. Expedia, Inc., 85 So.3d 517 (Fla. 1st DCA 2012).

A party to a lawsuit may seek appellate review of an adverse ruling through a petition for writ of certiorari, even when a direct appeal is not permitted by the Florida Rules of Appellate Procedure.  Fla.R.App.P. Rule 9.030(b)(1)(B).  “To support a writ of certiorari, the petitioner must demonstrate that the challenged non-final order (1) departs from the essential requirements of law, (2) results in material injury for the remainder of the case, and (3) such injury is incapable of correction on postjudgment appeal.” Sea Coast Fire, Inc. v. Triangle Fire, Inc., 170 So. 3d 804 (Fla. 3d DCA 2014), citing to Citizens Prop. Ins. Corp. v. San Perdido Ass'n, Inc., 104 So.3d 344 (Fla.2012).

Certiorari review is appropriate when a discovery order departs from the essential requirements of law, causing material injury to a petitioner throughout the remainder of the proceedings and effectively leaving no adequate remedy on appeal.  Orders improperly requiring the disclosure of trade secrets or other proprietary information often create irreparable harm and are thus appropriate for certiorari review.

Grooms v. Distinctive Cabinet Designs, Inc., 846 So. 2d 652 (Fla. 2d DCA 2003); Certiorari review “is appropriate in cases that allow discovery of privileged information. This is because once privileged information is disclosed, there is no remedy for the destruction of the privilege available on direct appeal.” Estate of Stephens v. Galen Health Care, Inc., 911 So.2d 277 (Fla. 2d DCA 2005); see Robichaud v. Kennedy, 711 So.2d 186 (Fla. 2d DCA 1998) (“Certiorari is the appropriate avenue to challenge a trial court order directing the disclosure of communications presumptively covered by the attorney-client privilege”); Ryan v. Ayco Farms, Inc., 174 So. 3d 615 (Fla. 4th DCA 2015) (reversing trial court order for discovery when right to that discovery had not yet been established); Courville v. Promedco of Sw. Florida, Inc., 743 So. 2d 41 (Fla. 2d DCA 1999) (quashing discovery order in certiorari concerning overly broad discovery order that required disclosure of attorney-client privileged communications that were not within the category of communications that were waived).

A writ of mandamus is an extraordinary writ issued from a court to a lower government official ordering the government official to properly fulfill their official duties or correct an abuse of discretion. See State ex rel. Buckwalter v. City of Lakeland, 112 Fla. 200 (1933).  A party may file petition for writ of mandamus with the Florida District Courts of Appeal to compel the trial court to do something which it should be doing.  Fla.R.App.P. Rule 9.030 (b)(3).

A petitioner (the party seeking the writ) must have no other available way to receive the requested relief, except the requested writ of mandamus.  Huffman v. State, 813 So. 2d 10 (Fla. 2000).  A writ of mandamus may only compel a trial court to do something that it is specifically required to do, but it may not compel the trial court to do something that is simply discretionary.  Solomon v. Sanitarians' Registration Board, 155 So.2d 353 (Fla. 1963).  For example, a trial court may be compelled through a writ of mandamus to hold a hearing and decide on an issue based on a party’s entitlement to a hearing, but it may not be compelled to decide the issue in a particular way.

A writ of prohibition is preventive and not to be used to correct a wrong which has already occurred. Morse v. Moxley, 691 So.2d 504 (Fla. 5th DCA 1997).   It may only be used to prevent damage that is likely to occur if the trial court intends to act without authority of law or in excess of its jurisdiction. Florida League of Hospitals v. Hospital Cost Containment Board, Dept. of Insurance, 492 So.2d 431 (Fla. 1st DCA 1986).  “[I]t cannot be used to revoke an order already entered.” Millennium Diagnostic Imaging Center, Inc. v. State Farm Mutual Automobile Insurance Co., 129 So.3d 1086 (Fla. 3d DCA 2014).  In a vigorously contested employment lawsuit, the Mavrick Law Firm prevailed on a Writ of Prohibition.  The appellate court found that the trial court improperly continued to exercise jurisdiction after dismissal, and rule in favor of the Mavrick Law Firm’s client by vacating a critical trial court order.

Florida businesses should always consider and prepare for every contingency, including potential unexpected rulings or appeals brought by the opposing party.  Florida businesses can prepare for these contingencies by retaining counsel with experience in both trial and appellate courts.  Mavrick Law Firm attorneys have substantial experience both in prosecuting and defending appeals before Florida's District Courts of Appeal and  Federal appellate courts.